Class of 2017 announced in Canastota 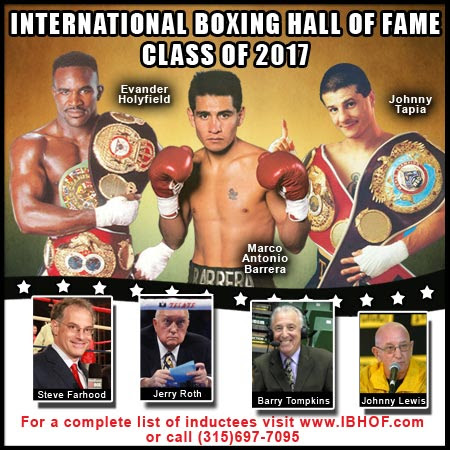 “We’re extremely excited about the Class of 2017 and are very much looking forward to paying tribute to the new inductees in Canastota next June,” said Executive Director Edward Brophy.

The 2017 Hall of Fame Weekend is scheduled for June 8-11th in Canastota, NY. Over 10 events, including a golf tournament, banquet, parade and autograph card show, are planned. An impressive celebrity lineup of boxing greats of yesterday and today will attend this year’s Induction Weekend. The highlight of the weekend will be the Official Enshrinement Ceremony on the Hall of Fame Museum Grounds in Canastota, New York on Sunday, June 11th to welcome the newest members.

For more information on the events planned for the 2017 International Boxing Hall of Fame Weekend, please call the Hall of Fame at (315) 697-7095, visit online at www.ibhof.com, on Facebook at www.facebook.com/InternationalBoxingHallofFame and on Twitter at www.twitter.com/BoxingHall.

“I’m honored to be inducted into the Hall of Fame and I’d just like to thank Jesus for giving me the tenacity to not quit.” – Evander Holyfield

“This is the best news for me. I’m very happy to hear this news that I have been inducted into the Hall of Fame and I am excited to go to Canastota!” – Marco Antonio Barrera

“Awesome. That is amazing news. I think it is so extremely meaningful for my family. My mom was brought to tears when she heard that he was nominated. She is 94 years old now and I guarantee you she is going to be at the ceremony with so much pride. Our whole family will. We are thrilled and honored.” – Jimmy Lennon Jr., son of Jimmy Lennon Sr.

“What an honor. It’s something you never think is going to be bestowed upon someone and when it is, it’s just a wonderful feeling not only for yourself, but for your family and the guys that were responsible for that happening and they were the fighters.” – Johnny Lewis

“It feels terrific. I can’t describe it. I’m absolutely thrilled. I did a lot of title fights over the years – over 200. I’m thrilled.” – Jerry Roth

“This is highest honor I could possibly receive. I have such respect for the International Boxing Hall of Fame. I’ve been a visitor so many times but next year will be special for obvious reasons. It serves as validation for a career that has been boxing, and pretty much nothing but boxing, for almost 40 years. I am truly touched and honored and I can’t wait until June.” – Steve Farhood

“Wow. I’m really flattered. To be recognized by the boxing community in general and by my peers in the media in particular is the highest compliment I could be given as a broadcaster. You want the respect of your peers and that’s what I’ve always strived for. I couldn’t be happier.” – Barry Tompkins