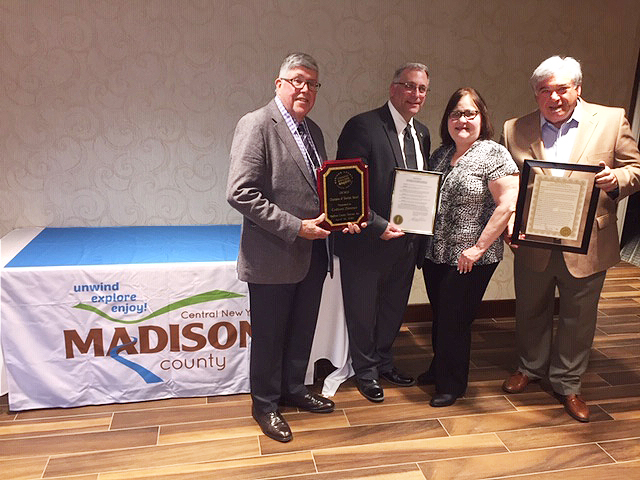 Madison County Tourism, the county’s official tourism promotion agency, recently named Colleen Zimmer as its 2019 Champion of Tourism. The award was presented to Zimmer, the director of the Oz-Stravaganza festival, during Madison County Tourism’s annual meeting April 18 at the Hampton Inn & Suites Cazenovia.

“Over the past three decades, Colleen has worked to grow Oz-Stravaganza from a small party and parade to a three-day world-renowned event that draws 30,000 people to Chittenango and Central New York each year,” said Truman Hartshorn, president of Madison County Tourism. “We thank Colleen and her festival team for all they do to bring Oz-Stravaganza—the largest and longest-running Wizard of Oz-themed festival in the world—to reality each year.”

Oz-Stravaganza is held each June and celebrates Chittenango-born L. Frank Baum, author of the Wonderful Wizard of Oz, and the world he created. The festival features one of the region’s largest parades, Oz programming, fireworks, amusement rides and more.

Hartshorn also noted that in addition to her festival work, Zimmer books group tours for the All Things Oz Museum, which now draws more than 17,000 visitors annually on top of the festival traffic.

“Incredibly, Colleen does not take a cent for her work,”Hartshorn said. “Everything she has done for the past 30 years has been as a volunteer.”

“Welcoming people to Chittenango for Oz-Stravaganza is an absolute joy, and I am honored to receive so much recognition,” Zimmer said. “But none of it would be possible without our festival team and the entire Oz committee. They are the heart, courage and brains who make the three days in June the wonderful event that it is.”

The Champion of Tourism Award is given annually to those who have had a significant impact on the tourism industry in Madison County.

Tourism is a vital industry in Madison County; according to data from Tourism Economics, tourism spending in Madison County rose 12.4 percent to $99.9 million in 2017. This spending generated $6.8 million in local taxes and $5.5 million in state taxes, which saved the average household $471 in taxes and sustained more than 2,200 jobs in the county.