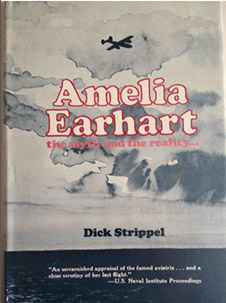 (Lancaster, Pa. – Feb. 2015) Noted author Richard G. Strippel has died.  Strippel earned national recognition as a leading authority about Amelia Earhart and his highly-researched book, Amelia Earhart — The Myth and the Reality.  He was 85.

Strippel’s 1972 landmark book methodically refuted the many theories that claimed Earhart worked for the government as a spy, some believed she returned to the United States and was living in New Jersey.  His research determined that the aviation legend simply ran out of gas and crashed at sea.

Acclaimed biographer Mary S. Lowell wrote, “Much of the credit for exploding the spy theory must go to Dick Strippel for a highly readable and technically laudable book, Amelia Earhart — The Myth and The Realilty, published in 1972.”

His research often is cited in other works on Earhart and can be found in libraries and collections across the country, including the George Palmer Putnam Collection of Amelia Earhart Papers at Perdue University and the Search for Amelia at the Waitt Institute for Discovery.

In his book, Strippel concluded Earhart’s initial fuel load was 980 gallons, based on two calculations:  a gross weight and take-off distance from a grass airfield in New Guinea in 1937.  He recounted a number of theories and navigational errors, possible errors, and the effects of those errors, concluding Earhart and her navigator crashed at sea.

In recent years, it was determined Earhart’s fuel load was indeed very close to Strippel’s estimate, about 1100 gallons.  Over the past few years, several search efforts were centered near the area Strippel presumed Earhart went down.  Another underwater search for Earhart is scheduled to resume this year.

His knowledge of Earhart and her ill-fated flight led to numerous print and broadcast interviews about the topic.  Strippel also published many articles on the topic and was working on a follow-up book, Amelia Earhart – A Reality Check.

Strippel also was a columnist for Popular Communications in the 1960s and 1970s and wrote many articles on amateur radio, his hobby.

Strippel was a public relations executive and retired from engineering firm Foster Wheeler in 1996.  He was a 1951 graduate of Colgate University in Hamilton and served as a Second Lieutenant in the Air Force during the Korean War.  He was a New York native and a long-time resident of Chatham, NJ before he and his wife Doris retired to Lancaster County, Pennsylvania.