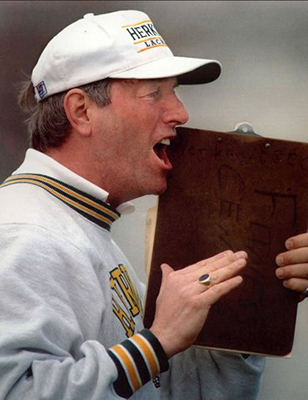 The College will honor five individuals and one team who have made outstanding contributions to the institution through intercollegiate athletics.

For reservations, contact the Herkimer County College Foundation Office at shepartda@herkimer.edu or 315.866.0300 ext. 8459.

J. Henriques of Kitty Hawk, N.C. was a member of the 1988 and 1989 men’s nordic ski team and won every meet he competed in, with the exception of one second place finish. In 1988, Henriques was Herkimer’s first national champion in the Men’s Nordic 10K among 400 skiers in the national college meet in Waterville, N.H.

Charlie LaQuay of Utica, was a technical assistant in the Athletic Department from 1989 to 2000. His duties included intramurals director, budget manager, equipment manager, supervisor of open gym and official clock operator and time keeper. Jason Palkovic, technical assistant for the Fitness Center said, “Charlie was a devoted Herkimer College sports enthusiast. He loved what he did. You will find very few people who were as committed as Charlie was.”

Sarah Lazarus, South Berlin, was a multi-sport athlete at Herkimer from 2005 to 2008, participating in cross country, track, basketball, lacrosse and indoor track. Lazarus was an outstanding runner as well as a two-year starter for the women’s basketball program. Lazarus’ accomplishments include placing third at the 2005, and then second at the 2006 cross country national meets. In 2007, she was national champion in both the 800m and 1500m races at the Women’s Track & Field National Championships. In 2008, Lazarus helped lead her team to win the College’s first women’s track and field national championship, finishing second in the high jump and second in the 3200m relay. Lazarus was named Herkimer College’s Female Athlete of the Year in 2006, and currently holds the record for the cross country course at Herkimer College.

Paul Wehrum, Little Falls, served as head men’s lacrosse coach from 1980 through 2003 and implemented the women’s lacrosse program in 2004 serving as head coach for three seasons. In 24 seasons coaching the men (1980-2003), Wehrum guided the Generals to a 403-62 record including three undefeated seasons, 21 consecutive Region III championships and eight national championships. He was named NJCAA Coach of the Year four times in 1985, 1986, 1992 and 1994. Wehrum was an assistant coach for the U.S. National Team which won the 1998 World Lacrosse Championship. He was inducted into the National Lacrosse Hall of Fame in 1999 and is also a member of the Long Island Lacrosse Hall of Fame, the Upstate New York Lacrosse Hall of Fame and the SUNY Cortland Hall of Fame. In 2005, Herkimer College dedicated its new athletic stadium to Paul Wehrum, naming the facility Wehrum Stadium.  Wehrum joined the faculty in 1979 and taught health and physical education until his retirement in 2006, and was subsequently named professor emeritus.

More information about the Herkimer College Athletic Hall of Fame is available at www.herkimergenerals.com/hof.