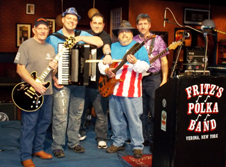 “This year will mark 20 years that we’ve been performing at the New York State Fair and we are thrilled about being there again,” said Fritz Scherz, band leader of Fritz’s Polka Band (FPB).  “I’ll never forget the first year my band played at the State Fair, we were on the K-Rock Stage. That was the start to a great bunch of gigs over the years at the State Fair and we’re so excited about this year being our 20th year performing there that we have a very special surprise planned. The neat thing about this gig, is that it’s such a family-friendly event, as we always see people in the audience ranging from small kids to people well over 80 or even 90 years old! We

take pride in being a band that brings generations together! As we’ve done each year at the State Fair since my Dad passed away, we’ll be honoring his legacy by playing some of the songs that he wrote!”